When I first became injured I was reluctant to admit to anyone, let alone myself something was wrong. I was running everyday and at a level where I believed that missing training would significantly affect my performance in races. This, to me, seemed like complete disaster and therefore something I was desperate to not let happen.

Despite only taking up running at university I had found something that I was naturally quite good at, and it had quickly become a part of my identity, a part I was not willing to sacrifice despite the pain.

Two years on, my desperation to remain “in the game” seems completely and utterly irrelevant…

All those practices I forced myself to go to, the spin classes I attended when I could no longer run- proud of myself for at least doing something; have now become black marks struck against me, ever prolonging my recovery time.

So why did I put myself through it? My body was in severe pain but I couldn’t bring myself to allow it the time to heal.

Maybe some of it comes down to the media these days. All around us there is so much pressure. There seems to be a race happening between everyone….

Almost everyone I know has a running app buzzing along in their phone pocket. We are obsessed with our active minutes, the amount of steps we take, and have even developed a penchant for analyzing our own sleeping patterns. Can you imagine telling your Granny that you know exactly how many hours sleep you are getting, and furthermore, that you actually care?!

The Abbie of 2014 would have not only done very well in this manufactured “race of life’ but would have also been an eager and willing participant. But fast forward to 2016 and the Abbie who was left with the distinct feeling that she is losing.

But that is a mentality which I have had to force myself to let go of. It was hard. Very, very hard. To let go and convince myself to not care about my position took real work. But the sadness I felt as I was metaphorically slipping down the ranks, trying desperately to claw my way back up by replacing running with other exercise was overwhelmingly damaging. It hurt me more mentally and physically than any of the original injuries ever did.

It was only when I realized it was a race I didn’t want, or even need, to win that I started to find some peace.

It might seem somber to say, but the realisation that life simply can’t be a competition because we will all lose in the end is the very idea that helped me move past my difficulties.

Yes, this thought can induce a crippling swirl into the inner-most depths of confronting mortality. But it can also be pretty liberating! Just like physical possessions our bodies are only temporary, therefore attempting to maintain a level of fitness that is unnatural and impacts the way you enjoy living your life makes no sense at all.

I really do think it is important to have a fit and active lifestyle to get the most out of life you possibly can. It is so important for interacting with the world and even the people in it.  l personally love going on adventures and the best race I ever took part in was so great, not because of the competition, but because of the route . Call me crazy but up a mountain I went one race-day and the experience was completely joyful and much more satisfying that any top position I achieved anywhere else.

What I could do without however, is the current feeling of inadequacy. To shake it it’s important to remind myself that it actually doesn’t matter that I am significantly less fit than I was 2 years ago. I don’t need to know my active minutes right now, and I am sure I don’t want my watch to watch me sleep.

I am still me – and in fact perhaps my forced resignation from this race has taught me that I probably don’t want to apply for entry again once I am better. I can think of much more enjoyable adventures to go on. 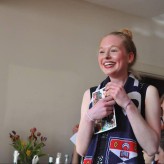